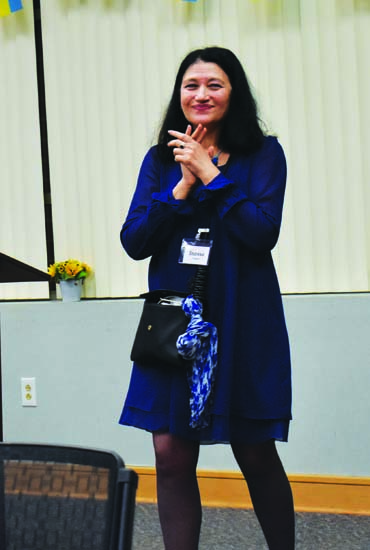 For three-and-a-half days in December, Inessa Nosenko inspired everyone she encountered during her brief time here.

Since day one of the war, Inessa has continued programming for all ages at the Mazal Tov JCC in Zaporizhia, Ukraine all while partnering with other organizations to revive and assist refugees from the worst of the war zones we hear about in Kherson, Mariupol, Melitopol, and more.

She is the Executive Director of the Mazal Tov JCC and a leader in her community.

Zaporizhia City plays an important role in the Ukrainian war. It is the first city on the road to safety to Western Ukraine, Europe, or beyond. It is near the Zaporizhia nuclear power plant. Its region of the country, called an Oblast, has been claimed by Putin to be part of Russia in a bogus annexation.

It is there from the Mazal Tov JCC she keeps going Chesed (think Jewish Family Services) and the many Weinstein JCC programs for toddlers, school-age children, teens, young adults, families, and the elderly.

She sleeps for weeks on a hard floor under a table with tens of other people together in one building or basement attempting to get periodic rest as their apartments are not safe to return to.

In just three of her Richmond community visits, she spent time at Rudlin Torah Academy, met U.S. Senator Tim Kaine, and spoke and interacted with Sisisky Fellows in the home of Mark and Susan Sisisky. Along with Inessa, she was accompanied by her husband, Volerie; and Kseniia, the Youth and Inclusion Director at the Mazal Tov JCC.

At RTA we had a live Zoom conference with 200+ Ukrainians of all ages from Zaporizhia, our sister city, and those in the current Ukrainian diaspora due to the effects of war.

Inessa fully engaged the kindergarten class with creativity, singing, and focused attention to those in the Zoom audience. They discussed and answered questions about Chanukah. Especially touching on the call were elderly people in Ukraine — their phones the only illumination of their faces as they live in darkness without electricity.

With Senator Kaine during a lunch at the Federation with other community leaders, we thanked the leaders and discussed the ongoing needs in Ukraine as well as those coming to the USA, so that they can get to work and provide for their families.

He and his staff are well versed and willing to be of continued and further assistance.

Our final stop was at the home of Mark and Susan Sisisky. At the gathering were a number of  the Sisisky Fellows, all young people who have seen Ukraine and Eastern Europe first hand before the war. At the get together, they were able to further understand what is happening on the ground today from Inessa.

We must thank the staff of the Weinstein JCC Preschool; JCC CEO Orly Lewis; Helen and Dana Griffin; Rudlin Torah Academy and Rabbi Elisha Paul; the sisterhood of the Jewish Community Federation of Richmond; Jewish Family Services; the Weinstein JCC staff;the entire group of Federation professionals; and the community in general.

To take action today, please consider making or growing your gift to the Federation’s 2023 Annual Campaign by visiting //jewishrichmond.givingfuel.com/annual-campaign.

Also, I welcome you to volunteer to participate in future Zoom calls to Zaporizhia.

For information, reach out to Sara Rosenbaum who can help in that regard.

Editor’s Note: Sam Revenson, a JCFR board member, is a longtime passionate supporter of Ukraine and the Zaporizhia Jewish Community. He has made a number of visits through the years there and connected with many in the Jewish community. Sam and his wife, Allison, gladly opened their home to host Inessa, her husband, Volary; and Kseniia, during their Richmond visit.