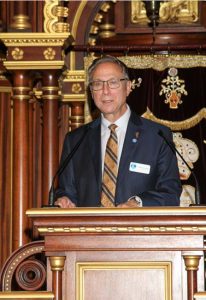 He continued, “Over the past two years, the Museum has launched a significant number of exhibits and events.”

Asher singled out the three-month Violins of Hope collaboration as a milestone. It featured exhibits, concerts and special programs with a private collection of over 60 violins, a viola, and a cellos at three museums.

In the collaboration between the Museum and the Virginia Museum of History and Culture, the Black History Museum, and the Richmond Symphony, collectively they welcomed 18,500 visitors to the museums and 3,000 more to concerts in Richmond, Hampton Roads, and Roanoke.

He also provided details on the opening in April 2022 of the Children’s Memorial, VHM’s newest permanent exhibit, which is dedicated to the memory of the 1.5 million Jewish children who were murdered by the Nazis in the Holocaust.

He then shared information about the creation of a new theater that will house an interactive hologram of Survivor Halina Zimm. VHM worked with USC Shoah Foundation on filming Halina Zimm in May.  “Visitors will be able to ask questions of Halina, as if she is sitting in the room with them, and receive her answers in real time.”