The event was held at the Virginia Museum of History and Culture on Nov. 9.

For an hour, attendees laughed, sang, applauded, wiped away tears and gave a standing ovation as they heard the passionate remarks, singing and jokes from

Guests also held small conversations and posed for photos with the speakers and others during the cocktail hour and later during the dessert reception.

The event chairs were Nannette and Nathan Shor and Tatyana Manelis and  Dmitriy Shapovalov. A special group of more than 50 people – couples and individuals – served as special event hosts

In her welcome remarks in the museum’s theatre, JCFR President Amy Nisenson, offered, “Welcome and thank you for joining us tonight as we celebrate the work of our Federation, our community, and the power of collective action.”

She noted the night “recalled one of our darkest periods, the night of November 9, 1938, when the sounds of breaking glass pierced the air in cities throughout Germany and Austria while fires devoured synagogues and Jewish institutions. By the end of the rampage, gangs of Nazi storm troopers had destroyed 7,000 Jewish businesses, set fire to more than 900 synagogues, killed 91 Jews and deported some 30,000 Jewish men to concentration camps. The Holocaust had begun, with Kristallnacht, the night of broken glass.”

we again find Jews on the front lines of war. In February, Putin invaded Ukraine, putting in jeopardy a nation, and hundreds of thousands of Jews, including 10,000 Holocaust Survivors. Decades of work, supporting, rebuilding, and rekindling Jewish life throughout Ukraine, along with the democratic country itself, are at risk.” 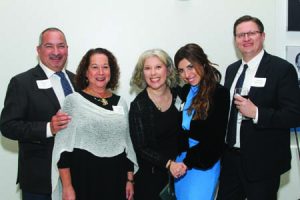 “Tonight, as we commemorate and remember Kristallnacht, let us also think of our family in Ukraine, today. Richmond has a long history of partnership with Zaporizhzhia, Ukraine, including exchanges with teens and our local BBYO chapters, visits by our Sisisky Fellows, community leaders and summer camp exchanges with the JCC.” 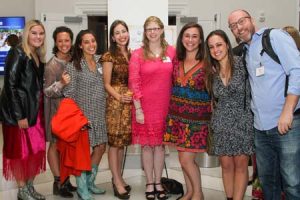 “Our Federation has been at the forefront of Ukraine relief efforts, including Leadership trips to the Polish/Ukraine border to deliver supplies and support and over $500,00 in direct financial support for elderly and social welfare programs in Zaporizhzhia.”

She recognized the “outstanding” support of JCFR partner JFS in resettling a Ukrainian family – Oksana and Kostiantyn and their three children. We are with you and all our Ukrainian family. As Jews we are responsible one for another.”

Each of the event chairs then spoke -Tatyana Manelis and Dmitriy Shapovalov and Nathan and Nannette Shor.

Tatyana related the terrible night she had in early March when she learned her family was in a desperate strait in the Ukraine. Thanks to help from Nannette, the Federation and the JDC, her family was able to get to safety quickly.

She also recalled when her family left the Former Soviet Union many years ago and how thankful she was to the Richmond community.

“The truth is my standing here today, though unlikely just a few months ago, is probably destiny. I was born in Odessa, Ukraine, and many of you were there for me and my family when I immigrated. Like so many others fleeing the Former Soviet Union, and the Russian war today, we knew we had to leave. You provided me warmth, food, and support, Richmond became my home.

“It was 9:17 p.m. on March 2nd. I received a call from my family in Odessa between the static noise and the panic on the line. I could make out the theme. ‘We need help, please help us, we have heard reports that our bridges will be blown up by midnight and we won’t be able to get out.’

“My family was in danger, including my elderly Aunt, and a 3-day old baby. Time froze and I felt helpless and desperate… but here is what I can tell you…”

While fighting back tears, she called Nannette and asked for help. “What happened next was remarkable. The Jewish Federation, who was there for me and my family 30 years ago, sprang into action again. Within hours, JDC, was at my family’s door with supplies, transport, and connection. Each of you, thanks to the network that Federation supports and sustains everyday, helped my family and friends be taken care of.

“So, I stand here today alongside my mentor Nannette, Nathan and Dmitry to begin repaying the miracles that you have made possible for me and so many others. THANK YOU!”

In his remarks, Dmitry, thanked all in attendance and the Jewish community. “Shalom. When Tatyana said we were chairing this event with Nathan and Nannette, I knew it would be an adventure and a ton of fun. That has proven to be true. I have learned so much and been inspired by the beauty and strength of this community. Events like these don’t just happen, they take a team, each playing a role and supporting each other. The Grand Event is no different.”

Community members left the Grand Event after being inspired, challenged and touched by the Fed Talk guests and other speakers. All learned so much more firsthand on what our Federation, JDC and Jewish Federations of North America have accomplished for Jews in Richmond, in Israel and all over the world.

The earlier remarks by Amy Nisenson had set the stage for the evening.

“Much like Pesach, tonight is a little different than other Grand Event nights. We are trying something different and new – our opportunity to have a little fun, think about our Jewish future and hear the unique ways that Federation, thanks to each of you, improves our world. I know it will be a wonderful evening.”

Miracles can happen as we all learned.