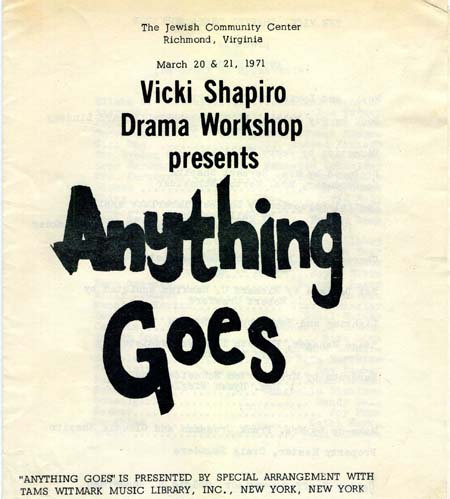 The upcoming production of “Anything Goes” at the Weinstein JCC brings back much nostalgia to a group of Richmonders, who were part of the show some 50 years ago.

The 1971 cast and production support, as part of the Vicki Shapiro Drama Workshop, was made up of local high school students. 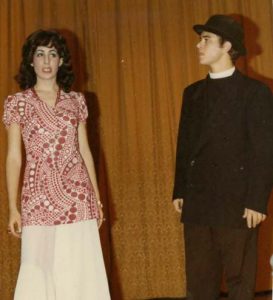 Barbara Sager Lustig (above) as Reno Sweeny, the nightclub singer; Steve Biegler (above) as Rev. Moon – the bashful criminal; and Jerry Williams, (below) the director who was then a 21-year old VCU drama student, all have fond memories.

In a 1971 article in the Reflector, Williams described the 1934 Broadway musical as “a musical pleasure cruise into the 1930s.” 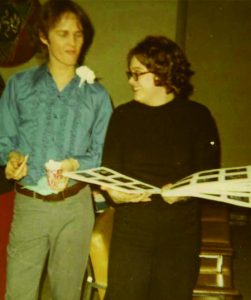 Williams added in the article, “It’s so much fun to work with (Cole)Porter. He loves to play with words… We are doing this in the style of the 30s, letting the girls imitate the hair styles and use of red lipstick.”

The Reflector recently asked the three to recall their work on Anything Goes in 1971.

What was your role or position with the show?

Barbara – I had the privilege of playing the lead role of Reno Sweeney.

How did you decide to try out or want the role/position?

Barbara -It was my senior year of high school where I performed in the Show Choir, The Madrigals, and The Jeffettes, a group that sang both in school and all over the city such as at Dogwood Dell, but had never had the opportunity to act and sing in a “Broadway” show so I tried out and was quite excited to get the leading role.

Steve –My childhood from age 6 until post college always included the Richmond JCC . I was in the orchestra at TJ and played music for all the high school plays and loved the energy of rehearing a Broadway play. As a child from the Bronx, and having grown up in a family, theater was in my blood from childhood.  Broadway shows and music both modern and theatre always surrounded me in my house. At some point I thought it would be fun to be on the stage.

Jerry – I was a senior and Theatre Directing Major at VCU and had directed 5 shows at the Barn Dinner Theatre (remember that?). Claudia Shapiro, who was also at VCU, recommended me to her mother who was producing the show.

What was it like performing in the show/or serving in your position?

Barbara -It was one of highlights of my entire life! Seeing my friends and family in the audience was truly a thrill. I had to learn how to tap dance and had several solos and duets to perform.   It was so much fun rehearsing dances with my “Angels” and songs with Steve Biegler, Lee Sherman, and Nannette Schneider (Wien).

Steve – It was a first, but I was with 4 great friends and a  fabulous director (who became a dear friend Jerry). That made the experience fun and provided a comfort level comfort for a first timer on stage ….

Jerry – Since it was 50 years ago, I don’t have a lot of clear memories. I do recall that Richard Hankins, who designed the set, went on to New York, where he was an Emmy-winning Production Designer on such shows at NYPD Blue and The Guiding Light.

One or two key memories that have remained with you from the 1971 show?

Barbara – I wore a wig that didn’t look all that different from my real hair and most people never knew the difference, and the costumes, such as my gold gown with the slit up the leg, and my boa made me feel so “grown up!”

Steve – “Reno Sweeney (Barbara Sager) was my gal and that special connection has been with the two of us for this past half a century.

Jerry – It’s not really a memory, but I’ve enjoyed running into Steve Biegler (who played Moonface) and his wife Claudia, at local theatres for many years. Ironically, I hadn’t seen Barbara Sager Lustig (my Reno) until we had our first meeting about the 50th Gala this year.

Have you thought about this show through the years?

Barbara -I have strolled down memory lane thinking fondly about this show many many times over the last 5 decades. I have a wonderful photo album complete with photos of the very young Jerry Williams who directed me and taught me how to act and strut my “glitz and glamour” so that my boisterous character would be believable to the audience.

Steve – Absolutely … Ran to New York a few years ago to see it and it felt great seeing it on a real Broadway stage with real Broadway professionals.

Jerry – Interestingly, when I went to see “The Sound of Music” last year, Artistic Director Deb Clinton suggested I consider directing a show. Within hours, it came to me: Why not remount “Anything Goes!?” Considering it was 50 years later, it was an exciting concept.

Did you perform or serve in a position with other JCC shows?

Barbara – I went off to college, so I never had the opportunity to participate in another JCC show.

Steve – Back stage a couple of other shows but no on stage roles… MOONFACE was a one and done for me.

What are your thoughts of the Center doing a revival of Anything Goes?

Barbara -I cannot wait to see the revival and see if I remember the lyrics to all the fun songs! Kudos to Jerry for being instrumental in making this reunion show a reality!

Steve – Very exciting and gave us a great excuse to plan a reunion of friends who were involved and friends who were not involved ( thank you my dear wife Claudia ). I am sure this talented group of actors will make us proud.

Jerry – The production 50 years ago featured a high school cast. This new show features some of the area’s most talented pros, plus some great new talent. Everything is elevated this time and it shows.  It was also great to see all the names listed in the program for the Vicki Shapiro Drama League and see how many of them have become leaders in our community.

Editor’s Note: The Reflector would like to thank Claudia Biegler for assistance on this article and to Barbara Sager Lustig for sharing her amazing scrapbook from the 1971 production.