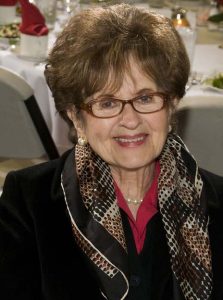 Holocaust Survivor, Halina Zimm, will receive a Humanitarian Award from the Virginia Center for Inclusive Communities (VCIC) for her contributions to the community on Tuesday, Oct. 25, at the Hilton Richmond Hotel & Spa, in Short Pump.

The following is Halina Zimm’s story of Survival.

Halina Drexler (later Zimm) grew up in Lodz Poland, with her parents and two sisters, Helen and Nana.  In Poland life was fairly normal until the Nazis invaded the country in 1939, when Halina was eleven years old.

The invasion closed schools and Jews were forced to wear the Yellow Star.  Recognizing the eminent danger to his family, Halina’s father, Solomon Drexler and his family evacuated Lodz and made their way to the town of Zarnow, where Halina’s maternal grandparents lived.

En route a group of Nazis stopped the Drexler family, stealing almost everything that they had with them.  In Zarnow, rumors circulated about the existence of concentration camps. Few people believed their stories; however, Halina’s father Solomon did.

He obtained two birth certificates for Halina and Helen from a very righteous gentile woman, who had befriended the Drexler family in Zarnow. This woman risked her life by providing birth certificates from her own daughters, whose identities Halina and Helen adopted to survive as Christians.  This woman’s gesture was an incredible sacrifice and has profoundly impacted Halina to this day. In November, 1943, Halina had to say goodbye to her parents, fearing and somehow knowing that she would never see them again. This was the most traumatic experience of her life.

Two weeks later, the Nazis arrived and deported the Jews of Zarnow to the Treblinka concentration camp.  Halina escaped to Warsaw where, in a train station, searched for someone to help her.  Halina met a woman who took her in, but neighbors began asking questions, so Halina knew she needed to leave.

Eventually, Halina found employment as a housekeeper for a young, aristocratic, newly married couple who lived directly across the street from the Warsaw Ghetto.  Halina lived many terrifying moments.

On one visit to the market, she saw a woman she had known in Zarnow.  The woman followed her home and denounced her to the Nazi Gestapo police.

Shortly thereafter, two Nazis arrived at the apartment, interrogated her, and accused Halina of being a Jew.  Miraculously, her employer stood up for her, convincing them that she was not Jewish – having worked in her home for over a year. The Nazi officers believed her and left with a warning: “We will research your story” and promised that “we know where and how to find you.”

Halina also can recall the Warsaw Ghetto Uprising.  Standing outside, she could hear people screaming and crying as the Nazis used dynamite to blow up the buildings where the Jews were hiding. This was a terribly painful scene for her to witness at fifteen, knowing she was powerless to do anything.

Eventually liberated by the Russians, Halina made her way back to Lodz to look for her family, where she learned her two sisters had survived.  Unfortunately, no other family members did.

She met her future husband Alan Zimm in 1945 and they married in Germany.  After three years waiting for their visas and proper documentation, Halina and Alan immigrated to the United States where they established new lives, raised four children, and became active members in the community.

Halina tirelessly educates hundreds and hundreds of students, teachers, and citizens of Richmond and beyond about the Nazi perpetrated Holocaust against the Jews during World War II.

Halina speaks to schools, universities, religious groups, the military, prisons, and people of all backgrounds about what happens when hate goes unchecked. Halina’s mission has always been to be the voice of her family and others who are not here to speak for themselves.

Halina’s message is always constant that “Hate is wrong and Love is right” and that “not all victims were Jews, but all Jews were victims.”

Halina speaks on a regular basis to the Alexander Lebenstein Holocaust Education Institute at the Virginia Holocaust Museum.

At The Education Institute, teachers from all over Virginia, North Carolina and other states learn curricula to teach about the Holocaust to their students.

The Holocaust Museum is working with the Dimensions in Testimony Program at the University of Southern California Shoah Foundation to create the Pepper’s Ghost display or the Hologram of Halina.  Once completed, Halina and her story will be at the Museum in perpetuity.

To learn more about this event or to purchase dinner tickets, please visit the VCIC website: https://inclusiveva.org/awards/richmond/.