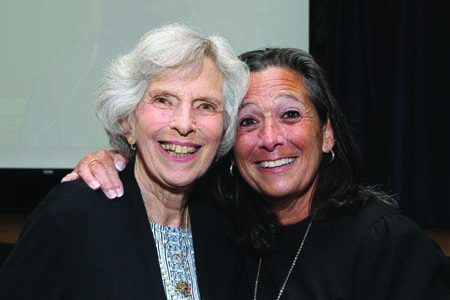 Outgoing Federation President Ellen Renee Adams was honored and celebrated for her many years of service to the Jewish Community at the 87th JCFR Annual Meeting on June 8 at the Weinstein JCC.

It was the first in-person Federation Annual Meeting since the 2019 gathering.

“Tonight we have the honor of celebrating the remarkable and impactful work of Federation, its volunteer leaders and professionals who work tirelessly on behalf of our community. We also get to celebrate our friends Ellen Renee and Amy, it’s going to be a fun night!”

They introduced a special 15-minute video tribute to honor Ellen Renee that featured videos messages from all of her family members and several community leaders. The video also included a series of photos of Ellen Renee and family members through the years as well as her on Federation Missions and other community activities.

In remarks following the video, while fighting back tears, Ellen Renee noted, “In the words of Helen Keller, ‘The best and most beautiful things in the world cannot be seen or even touched – they must be felt with the heart.’”

She continued, “You have allowed me to represent you in the Greater Richmond Community, in Israel and across the world. I have hugged Jews from Ukraine to Israel, Miami to Argentina. I have felt both proud and humbled by this amazing opportunity. It has been my greatest privilege.”

She continued, “Working with the Jewish community is my heart. It is essential to my being. It defines who I am and what I believe. It is about family, love, and being there for each other.

“These are the things that matter to me the most. I DO Jewish because I see my place in the world through a Jewish lens. And tonight, is a culmination of many years of learning, working, and volunteering in the Jewish world. Being President of the Jewish Community Federation of Richmond for these past four years has been the ultimate gift. A gift that lasted a little longer than I originally expected, but that only made it better.” 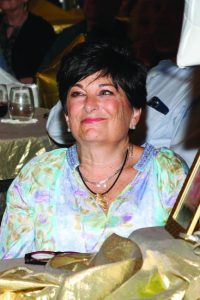 After being installed as president by  former President Neil Kessler, Amy noted, “What a meaningful and special night. Ellen Renee, my friend,  thank you. Not just for what you have done to support the community over the last few years, but what I know you will continue to do to support and enhance Jewish life going forward.”

She continued, “So many of us in this room have been touched by your humility, hard work and care for every member of our community. For that we are all grateful.

“It is such an honor to follow you as president. I only hope I can be as present and effective as you have been. You and I have known each other since birth, but we have really forged our friendship around our love of the Jewish community, our desire to give back in an impactful way, and our passion for the work of the Federation.”

Miriam Davidow, recipient of the Neil November Distinguished Community Award last year, made the presentation to the four local agencies. In the past, the award was presented to an individual or individuals.

She noted, “In recognition of all the chaos that was wrought over the past years, … the committee believed that this year, special recognition was necessary, and thus, the selection of an unprecedented awardees.

This year’s award presentation also included a video that showcased each organization’s contributions and commitment to our community over the past two years.

The following are a number of other photos from the Annual Meeting.