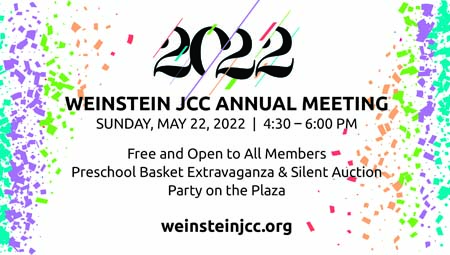 Join the Weinstein JCC Board of Directors, leadership, and staff in celebrating this past year at the Annual Meeting on Sunday, May 22.

The Weinstein JCC will host this year’s event in-person at the Center. Doors open at 4:30 pm. The meeting is from 5-6 p.m. followed by a party on the plaza at 6 p.m. This event is free and open to the community. Live music, food and fun are back!

We will look back and honor all we have accomplished in this past year. This year’s annual meeting is dedicated to the community that has supported us, the staff that continues to inspire us, and the volunteers and leadership that sustain us.

As the Center moves forward, the community is invited to join us in welcoming new Board Members: Susie Adolf (rotating back on to the Board as a regular member), Dr. Nathan Zasler, Charlie Scher, and Leeron Avnery.

The community is also invited to join in thanking and celebrating outgoing Board President Ashley Brooks. Ashley has distinguished herself as a judicious steward of the Weinstein JCC and never flinched in the face of difficult decisions. She has been integral in keeping the Center a safe, inclusive environment for the community to gather and build meaningful connections.

We also look forward to welcoming incoming President Greg Bishop. Bringing knowledge and experience, Greg has been actively involved on the JCC Board for over 16 years.

Prior to this position, he served as the Budget & Finance Committee chair. His three children are proud graduates of the Dora L. Lewis Family and Child Development Center and have attended Camp Hilbert many times over the years.

Greg has been very helpful ensuring the financial stability of the Center.

Erin is a sophomore at the Center for Human Development and Education at Glen Allen High School. She has been involved, and led, many teen groups in the Richmond Jewish community and been in BBYO for many years.

As a board member and officer of BBYO, Erin has guided her chapter through various fundraising activities to raise money to donate to the International Service Fund. ISF distributes scholarships to Jewish youth that otherwise would not be able to afford participation in BBYO activities.

The money raised also goes to disaster relief funds to assist communities worldwide. Locally, she has participated in making support cards for Beth Sholom Home residents during Covid and more recently to boost morale for the residents during challenging times.

Erin has led Havdalah, baked challahs with the chapter and taught them traditional songs to promote a strong Jewish sense of community and belonging.

Erin is also a member of JSU (Jewish Student Union), and she has served as her chapter’s president for the past two years. JSU creates a common bond at school and a social affiliation between Jewish kids.

As President, Erin has helped lead discussions on serious and common issues such as antisemitism and how to combat it in school. She works with the group sponsor on educating the other students on current events and holidays throughout the year.

She has also volunteered at the JCC’s Camp Ganim (2017-18), Camp Sababa (2019), and the Jewish Food Festival. Additionally, in 2021, at 15 years old, she tutored a student in preparation for Bat Mitzvah. In school, Erin participated in the Key Club, the SpeakUp Club, and has been a multi-year member of her high school’s golf team.

Based on her involvement and love for the Richmond Jewish Community, we are thrilled to honor her with the Arenstein Family Excellence in Youth Service Award.

Sarah is a long-time member and supporter of the center, as well as a graduate of the Dora L. Lewis Family and Child Development Center (Weinstein JCC Preschool) and the Young Leadership Program.

She served as the chair of the Global Day of Jewish Learning, Adult Committee, Fund Development Committee, and is an active member of the Preschool Strategic Task Force, and Board of Directors.

Sarah has dedicated many hours to the Center during this time and we are excited to honor her with the Leroy B. Goldberg Award.

Stuart Simon is a lifelong member of the JCC and has been an avid gym user for more than 50 years. He is an active member of the Board, having served with several CEO’s and Board Presidents. In addition to being passionate about physical fitness, he more recently co-developed and co-chaired, along with Lynn Schwartz, the Young Leadership Program which won an award in 2016 as best new program at the JCC Biennial in Baltimore and which has yielded several graduates who have become committee and board members themselves.

He currently co-chairs our Fitness Task Force with Chris Greenburg.  Stuart has also served on numerous other committees over the years including Board Advancement, Fund Development, and Sports and Fitness, as well as search and other special task forces, each contributing to the progress and success of the Center.  His commitment to the Center and its mission is evident in his energy, focus, and willingness to always participate and engage, no matter what the task at hand.

We are very happy to have Stuart serving on the board and excited to honor him with the Esther, Edith, and H.J. Bernstein Volunteer Leadership Award. 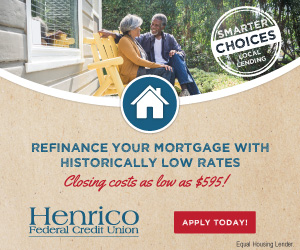 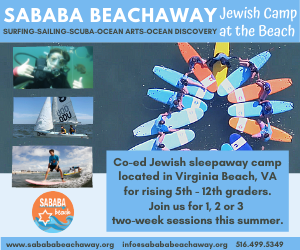