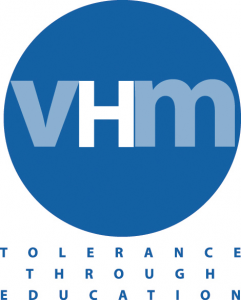 The Virginia Holocaust Museum proudly announces the opening on April 7 of the Children’s Memorial, a new exhibit honoring the memory of the 1.5 million Jewish children who perished in the Holocaust. This significant addition to the VHM’s permanent collection is the first Children’s Memorial of its kind in the United States.

Using mirrors and somber lighting for dramatic effect, the Children’s Memorial creates a stunning visual of an infinite panorama of empty classroom desks representing the unfathomable number of children and their unborn descendants who were victims of the Nazi’s Final Solution to exterminate Jews from Europe.

“It’s truly impossible to comprehend that over a million innocent children were murdered by the Nazi regime. We wanted to create an exhibition that works simultaneously as a memorial and also provides space for reflecting on the enormity of the genocide,” said Samuel Asher, executive director of the Virginia Holocaust Museum. 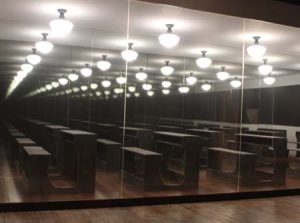 Asher noted that the vintage wooden desks in the infinity mirror classroom replicate the style of furniture typically found in a German school during the World War II era. “Our museum’s archivist, Tim Hensley, researched photos from the period and we also relied on the personal experiences of Holocaust Survivors,” he said. “The Children’s Memorial helps ensure that we never forget the horrors of history’s darkest hour.”

Asher noted, “I am startled by statistics from a Schoen consulting study that tell us that 41 percent of Americans can’t identify Auschwitz, a concentration camp where an estimated 1.1 million Jews and minorities were killed at the hands of the Nazis in WWII. We need to do more.”

Asher continued, “Whether in the Open Air Killings of Eastern Europe or the gas chambers of the extermination centers, the Nazi regime murdered the youngest generation of Jews alongside their families.

Designed by the Richmond-based firm Riggs Ward, the Children’s Memorial was made possible through the generous donations of Dr. Donald S. and Beejay Brown.

The VHM preserves and documents the history of the Holocaust. Through our exhibits, programs and educational events. We employ the history to educate and inspire future generations to fight prejudice and hatred.

As with all VHM exhibits, there is free entry to the Museum. Donations are accepted.