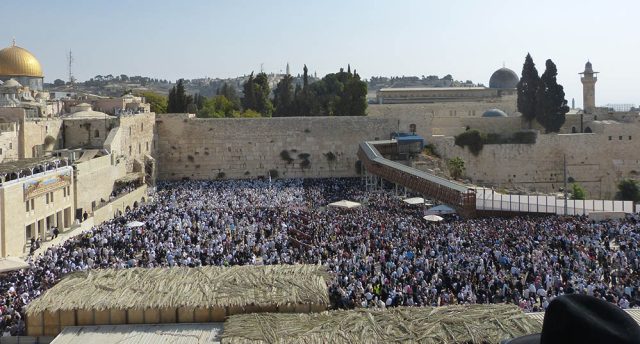 A lot of ink has been spilled recently about the “status quo” on the Temple Mount, the site in Jerusalem revered by both Muslims and Jews. I think a refresher course is necessary since the media seems to have completely forgotten what truth versus fiction is (once again) when it comes to Israel.

In an effort to clarify Israel’s efforts to safeguard the site and freedom of religion for both faiths Defense Minister Benny Gantz last week tweeted out messages in Arabic, Hebrew and English.(1) It read in part “Israel has ensured and will continue to ensure and defend freedom of prayer, the status quo on the Temple Mount and most importantly– the security of all the citizens of the area.” The Tweet reaffirmed that the “status quo” on the Temple Mount is being preserved,

But what exactly is the “status quo” on the Temple Mount and why has Israel maintained it for almost 55 years?

It started with the now famous announcement on 6 June 1967 when Israel recaptured the area during the Six-Day War that “Har HaBayit BeYadenu!” – The Temple Mount is in our hands!

As the war ended and Jerusalem was unified, then Defense Minister Moshe Dayan visited the Temple Mount and ordered the lowering of the Israeli flag that had been raised at the site and the removal of the paratroopers who had liberated it. Over the next few days, Dayan came up with plans that would eventually be called the “status quo.” He believed that the arrangement he envisioned was the best way to prevent a national/territorial conflict from becoming a religious one.

The basic elements of the status quo recognized that the Jerusalem Islamic Waqf (2), an arm of the Jordanian Ministry of Sacred Properties, would continue to manage the site and be responsible for arrangements for religious & civil affairs there.

Over time, non-Muslim visitation to the Temple Mount has become more restrictive with limited times and access points. Even though some interpret Jewish law as prohibiting ascending to the Temple Mount (as purportedly no Jew can walk on the spot where the Holy of Holies once stood, where only the High Priest on Yom Kippur was allowed to enter), there have been periods when Jews prayed on the Temple Mount.(3)

Even though Jews are presently not allowed to pray on the Temple Mount, the reality tells a slightly different story.  Just recently, Foreign Minister Yair Lapid needed to reaffirm Israel’s commitment to uphold the “status quo” on the Temple Mount and continue to prevent non-Muslims from praying there.(5)

And finally, and most relevant to recent events, Israel, assumed responsibility for security in this sacred area, both within the site itself and the wall and gates surrounding it. In addition, Israeli sovereignty and law would be applied to the Temple Mount aligning it with the other parts of Jerusalem after the Six-Day War.

However, as has been the case with similar unreliable reporting when it comes to Israel, recent events on the Temple Mount have been erroneously described by many, especially in western media outlets. In particular, the actions of Israeli police to keep and maintain peace have been criticized as being violent and even unlawful. This false narrative has given ammunition to Israel’s foes. Nothing could be further from the truth. The police were in fact lawfully fulfilling their obligation in maintaining the “status quo” on the Temple Mount.

Extremists are claiming that Israel has changed the status quo and that the Al Aksa Mosque is under threat. Neither is true. If anything, it is Jewish rights on Har HaBayit, the Temple Mount that have been curtailed to limit conflict with Muslim holy sites and worshippers.

This is likely part of a wider denial of any Jewish connection to Jerusalem and to the entire biblical homeland of the Jews. CAMERA, the well-respected media watchdog, contributor Ricki Hollander does an excellent job providing relevant background on the battle over Jerusalem and the Temple Mount.(6)

There is no doubt that the false claims that Jews are invading Al Aksa Mosque have been used repeatedly by anti-Israel forces to goad the masses to violence. There is nothing new about this libel as it has been used effectively by Arab leaders for decades.(7)

As was evident from recent videos of the violence on the Temple Mount, it was Arab perpetrators that desecrated Al Aksa by stockpiling rocks in the mosque, not removing their shoes, and hurling Molotov cocktails from the mosque that caused several fires in the mosque itself.(8)

What is our job? Stay informed. When you see inaccuracies in the media, in your friends’ Social Media feeds or in everyday conversation, please #SpeakUpforIsrael. Use this hashtag as a nationwide effort to say we are not afraid to speak up for Israel.