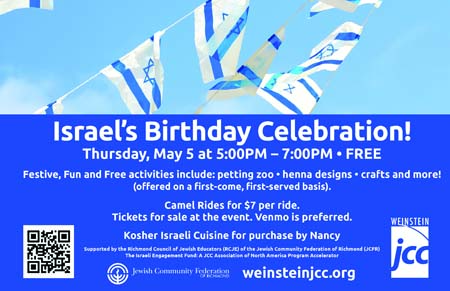 Flag
The colors blue and white were chosen according to the colors of the ‘Tallit’ – the Jewish prayer shawl. The Star of David appearing in the center of the flag has been a Jewish symbol for hundreds of years.

State Emblem
The official emblem of the State of Israel is the Menorah – a candelabrum, whose shape is derived from the sage plant (Moria). In certain species of the plant, the leaves branch out in a way that resembles the candelabrum that stood in the Holy Temple in ancient Jerusalem.
The Menorah appearing in the state emblem is similar to the one carved on the Arch of Titus in Rome. It is flanked by two olive branches that symbolize Israel’s longing for peace.

Capital
Jerusalem. Israel proclaimed Jerusalem as its capital in 1950. The United States, like nearly all other countries, maintained its embassy in Tel Aviv until 2018. In December 2017, President Donald Trump recognized Jerusalem as Israel’s capital and began the process of relocating the U.S. embassy to the city. It was moved to Jerusalem in May 2018

Declaration of Independence
May 14, 1948

Constitution
None; however, the Declaration of Establishment (1948), the Basic Laws of the parliament (the Knesset), and the Israeli citizenship law fill many of the functions of a constitution.

President
The first President, Dr. Chaim Weizmann, was sworn into office on February 16, 1949.
The President is the titular head of state and is elected by the Knesset every seven years, and the main duties are largely ceremonial.