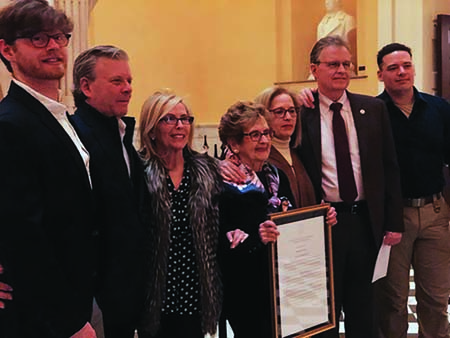 Due to the COVID, and strict safety and health protocols in place at the time, Halina Zimm, and other family members could not be present to accept the Proclamation. Consequently, recently on Sunday night, Feb. 28,  Delegates Rodney Willet and Schuyler Van Walkenberg met with the family members and friend, Survivor Inge Horowitz, and officially presented the framed Memorial Proclamation that the GA passed in 2021.

“I am very honored and proud that the General Assembly honored my husband with the Proclamation,” noted Halina. “This means so much to me.”

“I am glad that my family and good friend Inge was here with me to receive the framed Proclamation.”

“Alan knew everybody and loved to talk with everyone.” 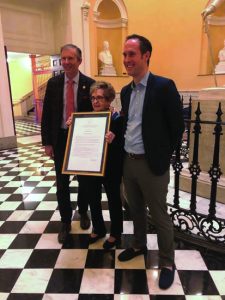 The resolution, in part reads, “Alan Zimm, a Holocaust survivor who ultimately made his home in Virginia and served generations of Richmond residents as a tailor, died on April 18, 2020; and

WHEREAS, a native of Kolo, Poland, Alan Zimm witnessed firsthand the invasion of his country by Nazi Germany, returning home one day to find that his family and many fellow Jews had been abducted by the Nazis; and

WHEREAS, Alan Zimm’s quiet dignity and unfailing kindness inspired others to lead lives of hope and humility; he participated in many events memorializing those lost during the Holocaust and frequently volunteered his time to educate young people about the dangers of anti-Semitism and other forms of bigotry; and

WHEREAS, Alan Zimm will be fondly remembered and greatly missed by his wife, Halina; his four children, Solomon, Ruth Ann, Rebecca, and Josh, and their families; and numerous other family members and friends; now, therefore, be it

RESOLVED by the House of Delegates, the Senate concurring, That the General Assembly hereby note with great sadness the loss of Alan Zimm, an inspirational member of the Richmond community;

For the full Proclamation, visit: