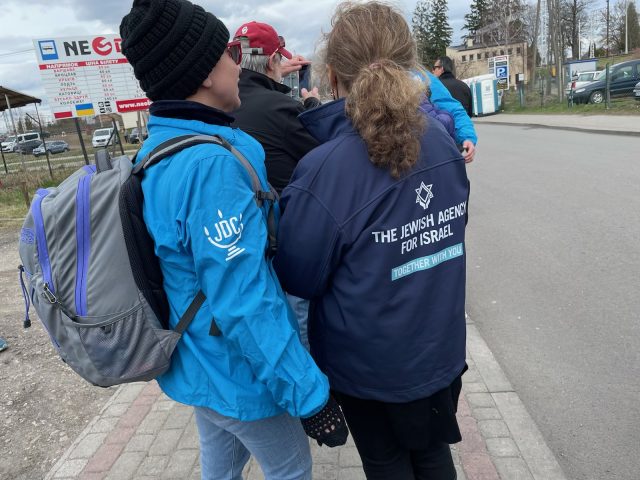 It’s hard to believe that none of this stuff existed 6 weeks ago. There are organizations from all over the world in tents giving out food and clothing as you walk down the path towards the border. Just before you reach the gate, on your left, are the tents shared by the JDC and JAFI. It’s the first thing refugees see when they walk in the gate after processing. In those tents they can get immediate medical help, food, a resting place for moms and their kids, and whatever guidance they need.

There were individuals and families coming into Poland sporadically during our time there today. We were told that the traffic slowed down the last week or two.

We also saw people returning to Ukraine, which is consistent with the article in the New York Times today that some are heading back into the country for various reasons. Why go back? We asked the same question. Some simply love their country and want to return. Some may have been in Poland for several weeks now and run out of money or miss the family and friends they left behind. Some may just not like it in Poland. One female volunteer surmised that women in Ukraine are not used to making important family decisions without their husband and are uncomfortable. In all likelihood, the reasons for returning are one or a combination of the above.

The people we saw generally had one small suitcase but not more. They appeared economically diverse, but who knows. After they enter the country, they are bussed to a humanitarian aid center which I will describe in a separate blog post.

We were told that the first two weeks at the border were extremely chaotic, as you can imagine. While it is more manageable now, they don’t know what’s going to happen at any moment. The volunteers said they could get a call that the Russians had invaded, or might invade, a town or city, and this will lead to an influx of refugees that day or the next.

There is a definite sense of community, respect, and selflessness. There is no competition among the organizations to serve refugees as they enter. Everyone simply wants what’s best for each individual person and family entering — and leaving — the country.

It’s an interesting and conflicting feeling. You’re so proud of how fellow humans and organizations have responded so rapidly, efficiently, and successfully to all this, yet you’re sad and wish it was never necessary to begin with.