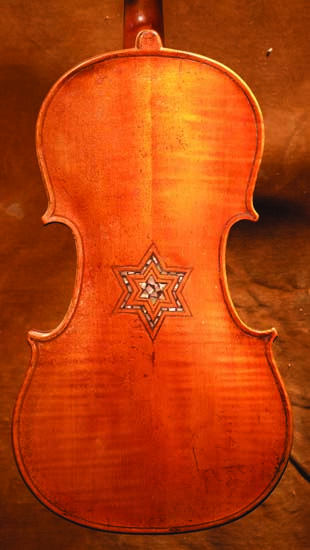 During August, September and October, our region hosted the “Violins of Hope Richmond” exhibit for its first visit to the Mid-Atlantic.

This extraordinary showcase featured a collection of 57 violins that were played by Jewish musicians during the Holocaust and were restored to concert-quality condition by Amnon Weinstein, an Israeli violin maker and master craftsman.

Many of the violins were on display at the Virginia Holocaust Museum, the Black History Museum & Cultural Center of Virginia, and the Virginia Museum of History & Culture.

Other instruments in the collection were selected by professional musicians for powerful performances in featured concerts by the Richmond Symphony and for community concerts in Richmond, Hampton Roads and Roanoke.

More than 2,000 people attended these concerts, elevating the works of Jewish composers whose music was silenced by the Nazis but now lives on through the “Violins of Hope”.

A diverse steering committee of leaders in the RVA community collaborated to ensure that “Violins of Hope” offered a unique experience through displays, a concert series, educational programs and outreach to audiences across Virginia. Their partnership and support were essential to the exhibit’s successful run in Richmond.

The mission of “Violins of Hope” was dedicated to initiating a deeper, more meaningful dialogue about tolerance and social justice, while also educating audiences about the horrors of the Holocaust. Each violin in the collection told a story that was heartbreaking and — all too often — tragic.

One survived the horrors of Dachau in Germany and Auschwitz in Poland. Another was dedicated to a brother and sister who played concerts in the ghetto of Vilna in Lithuania.

A third recalled the powerful attraction of a klezmer band to a young boy who escaped Eastern Europe and later would open a violin shop in Israel. These are just three examples of the remarkable stories of resilience and survival shared with attendees at the concerts and educational programs, and with visitors to the three museums.

In today’s atmosphere of political, ideological, cultural and racial divisions, the message of “Violins of Hope” has never been more relevant and important to our society. Through the music of long-neglected composers who perished during one of history’s darkest hours, these lovingly restored instruments provided a unique opportunity for the community to join in conversations about fighting racism, bigotry and prejudice.

We would like to extend a sincere thank you to the Richmond Symphony for its inspired performances in our featured concerts at Cathedral of the Sacred Heart, St. Mary’s Catholic Church and the Dominion Energy Center’s Carpenter Theatre.

In Richmond, community concerts were held at the three partner museums, Weinstein JCC and Congregation Beth Ahabah. The violins also traveled to the Virginia Arts Festival in Hampton Roads and the Grandin Theatre in Roanoke.

Special thanks go to Dr. Roger Loria, a Holocaust Survivor in Richmond, who shared his personal story at a number of these events, as well as second-generation survivors and presenters Rachel Loria and Miriam Davidow.

Our most profound appreciation goes to Amnon Weinstein and his son, Avshi, for bringing the violins back to life and sharing them with audiences throughout the world.

Avshi’s participation in the concerts and events created a connection to his father’s passion for locating and repairing violins from the Holocaust so the voices of the original owners could sing out again.

Working together for more than three years, our museums and our community partners were honored to bring “Violins of Hope” to Richmond.

Thank you, RVA, for helping us build a better central Virginia and beyond.

Editor’s Note: This column was first published in the Richmond Times-Dispatch.