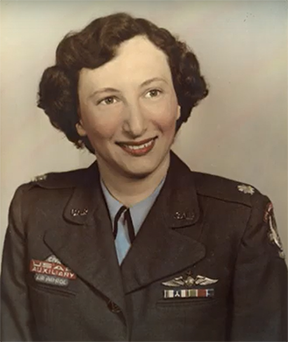 Editor’s Note: The Reflector thanks the Jewish National Fund for authoring and sending in this article.

In 1941, an unassuming thirteen-year-old Jewish girl from small-town America lied about her age to join the United States Air Force Auxiliary. She would go on to become the first woman to join the Civil Air Patrol (CAP) and become the longest and oldest serving member in her Virginia CAP wing before her passing in 2020.

American aviation pioneer, Amelia Earhart, once said that “a single act of kindness throws out roots in all directions, and the roots spring up and make new trees.” And while the late Colonel Carolyn Guertin of Richmond, Virginia, was only 9 when Earhart disappeared, she would go on to break the “glass sky” for female aviators, while embodying Earhart’s quote through the bequest she left to Jewish National Fund-USA (JNF-USA) following her passing on August 8, 2020.

Carolyn was born in 1928 to Dr. M. Herbert Weiss and Henrietta Shapiro Weiss. Dr. Weiss earned three PhDs and created a new method for teaching and learning English that’s still used today. Carolyn inherited her father’s intellectual curiosity, and from a young age was fascinated by flight. “Carolyn became a pilot and flew a plane before she could drive a car,” said Rhett Weiss, Carolyn’s nephew.

She enlisted in the United States Air Force Auxiliary as a Civil Air Patrol (CAP) member when she was just 13 years old, lying about her age so that they would let her in. According to family lore, Carolyn was the 11th person to sign up. On the very first day to sign up, she was first in line, but the processor told her to sit down so the men could go ahead of her.  After ten men enrolled ahead of her, she stood back up and asked the processor, “Is it my turn yet?” Number 11 became one of her nicknames. By the age of 20, she already had experience flying planes solo.

She later founded a CAP squadron in Richmond, Virginia, and served as its commander for over ten years. To mark her 92nd birthday, the squadron was renamed from “Richmond Cadet Squadron Two” to “The Carolyn A. Guertin Cadet Squadron” in her honor at a ceremony hosted by Civil Air Patrol National Commander Mark Smith. The squadron now has a number 11 on the logo.

For an incredible 79 years, Carolyn served in the CAP, rising to the rank of Colonel.  She was the oldest and longest serving member of the Civil Air Patrol’s Virginia Wing and was an active member till the day she died, participating in a search-and-rescue training mission just several months before she died. 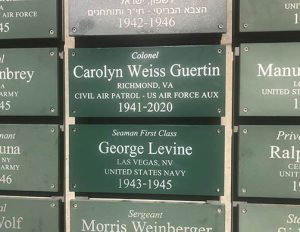 In 2014, Carolyn, along with others who served in the CAP during WWII, received the Congressional Gold Medal for her service during WWII. The medal, which is Congress’ highest expression of national appreciation for distinguished achievements and contributions, puts her in the esteemed company of people that include George Washington, Reverend Dr. Martin Luther King, and Elie Wiesel. Her service is also acknowledged at JNF-USA’s Wall of Honor at Ammunition Hill in Jerusalem, Israel – a project that acknowledges Jewish servicemen and women from around the world.

Husband Was a Pilot

In addition to her service with the CAP, Carolyn worked for Virginia State Corporation Commission. She also took a serious interest in religion, often studying other religions to gain a better understanding of both the religion itself and the people who observed it. “She would sometimes attend other houses of worship, just to see what it was like,” said Rhett. “She would read about other religions and cultures.”

While she never had children, Carolyn maintained close relationships with her family. Despite living over 100 miles away from her brother, Armand, and her sister, Florence, Carolyn kept in touch with them constantly over the years via phone calls and occasional family visits.

Carolyn was also a staunch supporter of the land and people of Israel. On a trip to Israel that Carolyn took with Florence, Carolyn brought back with her many souvenirs, something that Rhett found out as he was cleaning Carolyn’s house. By leaving a legacy gift with JNF-USA, Carolyn ensures that her legacy will live on for generations to come.