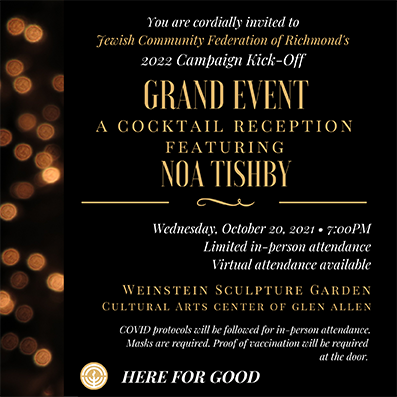 The Jewish Community Federation of Richmond is pleased to welcome Noa Tishby to Richmond as our guest speaker for the Grand Event, on Wednesday, Oct. 20, 7-9 p.m.

She is an Israeli-American author, actress, producer and activist. A Tel Aviv native, she served in the Israeli army before landing a starring role on the nation’s highest-rated prime time drama, Ramat Aviv Gimmel.

After becoming a household name and appearing in numerous TV shows, films, theater productions and fashion campaigns, Tishby moved to Los Angeles where she sold the Israeli TV show “In Treatment” to HBO, which made history as the first Israeli TV show to become an American series.

Tishby earned a Peabody Award and Emmy and Golden Globe nominations for her work on the show.

She is the founder of “Act for Israel,” Israel’s first online advocacy organization and is the author of “Israel: a Simple Guide to the Most Misunderstood Country on Earth.”

After years of speaking and writing about Israel, both publicly and privately, Tishby deciphered how to explain the complexities of Israel in a clear and relatable way in her first book that was published in 2021 by Free Press, an imprint of Simon & Schuster.

It has been heralded as a “must-read” and earned praise from thought-leaders across the political spectrum, including Bill Maher, Aaron Sorkin, Yossi Klein Halevi, Maajid Nawaz, Democratic Congressman Ritchie Torres, Rabbi David Wolpe and Ben Shapiro.

It has topped the Amazon best-seller lists in Israel & Palestine History, Jewish Biographies, and Historical Middle East Biographies, among other categories.

The Grand Event kicks off the JCFR 2022 Annual Campaign.

The in-person event will be a cocktail reception in the outdoor Weinstein Sculpture Garden at the Cultural Arts Center of Glen Allen.

COVID-19 protocols will be in place. In-person attendance will be limited to 150 people, and masks will be required. Proof of vaccination will be required at the door. The Grand Event also will be available virtually on Zoom.

We thank our corporate sponsor, Allianz.

Tickets for in-person attendance are $54 per person and $18 for viewing virtually per household.