The highly successful and acclaimed Violins of Hope  Richmond will conclude its 12-week stop here on Oct. 24.

Sponsored by the Virginia Holocaust Museum, it arrived in Richmond in early August for the first time and has seen a large turnout of people at  three museums, special events, lectures and community concerts.

VHM Executive Director Samuel Asher said, “We believed the Violins of Hope exhibit would be visited by individuals at the three museums,  but we are amazed at the large turnout at the featured concerts.  We appreciate so much the time and effort by musicians from the Richmond Symphony. They all said it was an ‘honor and privilege’ to perform music on the violins and other instruments. Their music captured the moment and brought to life the stories of that time period.”

Violins of Hope features a collection of restored violins that were played by Jewish musicians during the Holocaust. These inspirational string instruments have survived concentration camps and long journeys to share stories of redemption, resilience, and the legacy of Jewish musicians.

Violins from the collection are on exhibit at three locations: the VHM, The Virginia Museum of History & Culture and the Black History Museum and Cultural Center. Each museum showcases different violins with separate stories and backgrounds.

On Sept. 9, 10 and 12, Violins of Hope, in partnership with the Richmond Symphony, hosted three sold-out featured concerts at Cathedral of the Sacred Heart, St. Mary’s Catholic Church and the Carpenter Theater.

The Sept. 12 concert was added by the Richmond Symphony since the first two concerts were sold out early. During the concerts, guests heard from special guests Avshi Weinstein, Israeli violin maker and son of Israeli violin craftsman Amnon Weinstein, and Dr. Roger Loria, a Holocaust Survivor.

Richmond Symphony musicians brought to life the music that honors the musicians, the people and the stories of the Holocaust.

In addition, a concert, “Stories and Strings, on Sept. 26, at the Weinstein JCC took place before a sold-out audience. 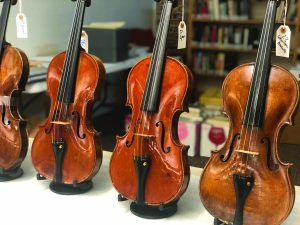 Oct. 6 – Virginia Arts Festival with the Holocaust Commission of the United Jewish Federation of Tidewater, 7:30 p.m. This event is at the  Johnson Theater at Norfolk Academy.

Oct. 19 – The Virginia Holocaust Museum with Violins of Hope will present a concert at the Grandin Theatre, Roanoke, 7 p.m. (This concert was recently added) For tickets, visit www.grandintheatre.com/