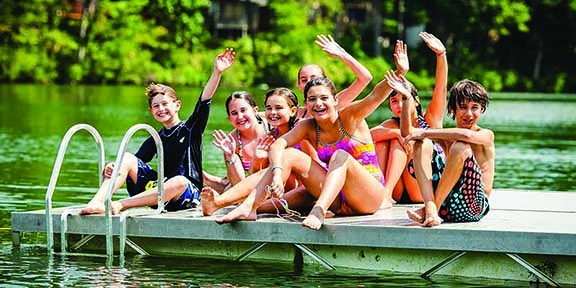 The Jewish Community Federation of Richmond is proud to be a One Happy Camper (OHC) Community, finishing off our 1st summer. Funders nationwide have invested $100 million in One Happy Camper, the incentive grant program for first-time attendees of Jewish overnight camp.

In Richmond, for our first year in the program, the JCFR funded 10 of these grants. Plus, an additional $1,500 in needs-based camp scholarships to support 24 campers from the Richmond area in total.

The hope is that once children get a taste of Jewish overnight camp, they’ll come back the following year, and build a connection to the greater Jewish community and Jewish values and practice.

“Nationwide, this summer, the OHC made almost 10,000 grants, about 30% more than a typical year,” said Rebecca Kahn, senior director of field expansion at Foundation for Jewish Camping.”

She continued, “Due to last year’s cancellation of most camp programs and the restrictions on children’s lives during the pandemic, more families made camp a priority in 2021.They were eager to provide their children with a sense of belonging, independence and the simple joys that Jewish camps offer.”

One Happy Camper started in 2006 in Chicago with more than 500 grants, and more than 150 camps have participated in it to date.

The OHC recently noted, “It is with great pride and gratitude that the One Happy Camper initiative along with its Jewish partners have  officially reached 100,000 One Happy Camper® grants in 2021.”

The program – a collaboration between the Foundation for Jewish Camp, numerous Jewish Federations and Jewish communities in the U.S. and Canada and camp providers – offers incentive grants of up to $1,000 to families of first-time campers.

Jeremy Fingerman, CEO of the Foundation for Jewish Camp, noted, “We have such enormous pride that a concept piloted back in 2006 has just been consistently growing in interest and demand, and that 80 percent of One Happy Camper recipients return for year two and beyond.

“Once they’re in Jewish camp, they are hooked.”

Applications for financial aid for the 2022-23 School Year Open Jan....