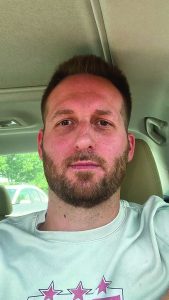 I had the pleasure of participating in the 4th Partnership2Gether’s Leadership2Gether (L2G) cohort where I was paired with an engaging Israeli named Omri Ben-Natan, of Pardes-Hanna Karkur. Omri, and I quickly established rapport in our many ZOOM calls sifting through engaging prompts our program leaders provided.

Our conversations were natural and easy, allowing us to both learn intimately about each other’s family, career, and philosophical principles and to simultaneously become fast friends as we shared laughs and stories.

I had been seeking a way to meaningfully contribute and connect to the Jewish community. The L2G program was a perfect forum to that effect where I could listen to a variety of Jewish perspectives both from Israel and the east coast of the United States.

Omri and I met privately every couple of weeks, and we met with the larger group of 32 participants each month.

I was quite curious what it was like to live in Israel. Was it safe? Is the political environment really as intractable as reflected in the (many) countrywide elections? What were his thoughts on conscription and did his perspective evolve after he had daughters? These are just a smattering of topics I yearned to learn more about and Omri was kind enough to indulge my inquiries.

The monthly group sessions were interactive and provided robust discussion where it was perfectly safe to disagree. And disagree (with vigor) we did at times, but as a credit to the program leaders and the participants themselves, all differences of opinion were fully considered and expressed respectfully.

The forum was designed to challenge participants to reflect on what it means to be American or Israeli, to be Jewish, and to hear directly from opposite sides of the Atlantic.

Midway through the program we were tasked with advocating for a non-profit of our choosing. The assignment called for us to ultimately present before an experienced panel where they would ask detailed questions to determine which entity was most worthy of receiving the funds. This was real money at stake — and not an immaterial amount.

Each participant was asked to consider a local organization they were passionate about and subsequently try to persuade their partner to consider channeling their collective efforts toward it as each group would present one non-profit.

Now I can be quite a zealot activist myself, but Omri’s chosen organization, Bein Hatlamim farm, won me over when I discovered his personal connection to the farm and the wonderful growth opportunity it provided at-risk teenagers.

Bein Hatlamim provides fresh produce to a local Israeli community much like a CSA. However, where they differ is that the young couple who founded the farm employ teenagers to grow, harvest, package, sell and deliver the produce. These young folks are practically entrepreneurs, and the group is self-sustaining with the sale of its produce.

I was sold. I worked diligently to learn all I could about Bein Hatlamim and draft a bevy of slides highlighting the delectable finished product and the journey involved to get there. Come presentation day, Omri and I had rehearsed multiple times and I was surprised at how nervous I remained. I wanted to win! I wanted to win so badly because I believe so deeply in the organization’s mission.

We were the last group to present that afternoon, and I was pacing impatiently before we were called. Finally, our time arrived, and we made our pitch to the panel. The wait to reveal the winner felt like it dragged on for hours, but it was probably only 15 minutes…and then…we won!

I yelled out triumphantly as the culmination of our effort was rewarded by the committee and the farm could use the funds to expand and hire more teenagers. It was a great achievement and I was proud our many hours prepping paid off.

If you are interested in actively leaning into an educational experience to gain perspective, insight, fundraising experience and maybe even gain a lifelong friend or two, I encourage you to consider joining an L2G experience.

I am very grateful I did.

Conor Shapiro lives in the Manchester area here with his wife, Ashley, and moved to Richmond from the Washington D.C., area in 2016 where he last worked for the U.S. House Appropriations Committee. Today he works for the Virginia Retirement System.

He is the President of Friends of William Byrd Park, a graduate of the Federation’s 2020 Community Leadership Class, and enjoys competing in triathlons, playing tennis and seeing shows at the Altria Theater.

L2G is a premier program of the Federation’s work with the Partnership2GETHER Hadera-Eiron Southeast Consortium.

Since 2013 Richmond has been a partner with the Hadera-Eiron community in Israel and 11 U. S. Jewish Communities in Charlotte, N.C.; Greensboro, N.C.; Charleston, S.C.; Chattanooga, Nashville and Knoxville Tenn.; and Flagler and Volusia Counties, Lee & Charlotte Counties, Pinellas County and Jacksonville, Fla.

P2G cultivates close friendships and runs a variety of programs such as cultural exchanges, teacher exchanges, teen exchanges, leadership programming and other activities, which build relationships between our U.S. Consortium Communities and the Hadera- Eiron Region.

The impact of these projects goes far beyond the community level – each of us has the opportunity to become directly and personally involved.

L2G offers a joint leadership study program consisting of groups of young professional adults in the U.S. and Israel.

The program takes advantage of current communication technology to engage Israelis and American paired together for a Hevruta (one-on-one learning sessions) through texts about their Jewish heritage and identity and their responsibilities as Jews to their own community and to the worldwide Jewish community.

The program’s highlight event is a face-to-face meeting in a retreat format for a joint study weekend experience.