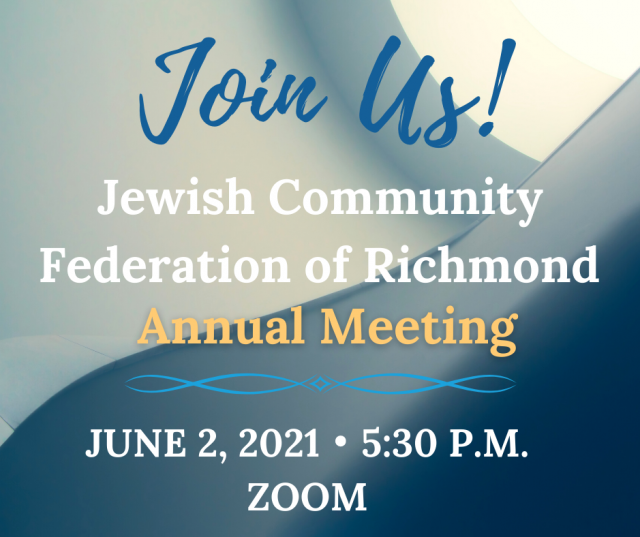 The Jewish Community Federation of Richmond celebrated and looked back on what was achieved as a community over the past year at its 86th Annual Meeting, held Virtually, on June 2.

Ellen Renee Adams was re-elected president and a new Executive Board of Officers and several Board members were re-elected to new terms.

In her remarks, Adams noted that Golda Meir once said, “Nothing in life just happens. It isn’t enough to believe in something. You have to have the stamina to meet obstacles and overcome the struggle.”

“How appropriate for the last year,” Adams said. “It has definitely been a struggle. In the midst of a global pandemic, our world turned upside down yet we came together to accomplish so much. We responded to those in need and distributed over $303,000 in COVID relief funds to support individuals and our agencies. We led, advocated and supported our agencies in successfully obtaining over $4.5 million in PPP loans.”

She saluted the work of the 2021 Annual Campaign team of Chair Amy Nisenson and Federation Director of Development and Engagement Jesse Feld and “their amazing lay and professional teams who held one of our most successful annual campaigns ever; raising over $3.25 million, more than $400,000 over last year.”

Adams continued, “It was not just about the dollars” as she reviewed a variety of other achievements including hosting multiple national conferences on Zoom, inspiring thousands in Richmond, holding virtual cooking classes, Israel tours, speaker events, securing more than 350 COVID vaccines for individuals and much more. “We spent more than 500 hours with volunteers.”

She noted, “We advocated FOR Israel, and AGAINST Anti-Semitism, built interfaith connections, met elected officials and were a voice of strength and reason during challenging times.”

The Federation president noted, “The case for Federation has never been stronger or clearer. During this past surreal year, thanks to the network of services and support – sustained by our Annual Campaign — we stepped up, reached out and made an important difference in our community.

“As I often say, this is what we do.  Federation was built for times like these! We were there before the pandemic, we will be thereafter. We have 85 years of experience, thanks to you. We had the resources and know how to pivot quickly and effectively.  Our community partners, volunteers and community came TOGETHER.  We showed why this wonderful community is so special when Richmond comes together.”

In awarding a President’s Award to Assistant Treasurer Josh Goldberg, Adams noted, “Josh truly has gone above and beyond.  I have personally have known him for 40 years and watched him become a leader in the last five. He has gone from new Board member, Allocation’s Chair to Executive Committee Member. ” 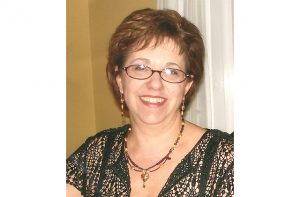 Longtime community leader Jim Weinberg awarded the Neil November Distinguished Community Service Award to Miriam Davidow for her dedicated and passionate service to the Jewish and non-Jewish communities over many decades.

Weinberg, a previous recipient of the DCSA, noted, “Miriam’s devotion to the Jewish community and volunteerism honors the legacy of Neil November.”

He reviewed her long history of community service. “For Miriam, education always has been a priority. She served as an educator, mentor, trainer, professional consultant and advisor to many.”

Weinberg noted she is a founder of the Richmond Jewish Coalition for Literacy, has taught and mentored at the Weinstein JCC pre-school, Richmond public schools and Temple Beth-El.  In addition, she has chaired the Grants Committee of Richmond Jewish Foundation and has been a longtime member of the Board of the Virginia Holocaust Museum. “Miriam has a long history of serving as an advocate for many causes,” he said.

In reviewing the past year, Federation CEO Daniel Staffenberg, noted, “I can no longer count how many times I turned on a Zoom and felt comfort by our volunteers making holy our work and seeing our Jewish professional colleagues supporting, lifting up and working together. Those were moments of strength on the screen.”

He continued, “I found throughout the year great strength in connecting, in exploring new ideas and trying new things — working together in new ways.  I also enjoyed the closing of distance that Zoom allowed us — to build bridges with our friends and family in Israel, to feel close even while distant. We were in the same storm at the same time.

“We have secured our community, built stronger relationships and dreamed about what the future may bring. I look forward to the year ahead putting those dreams into action.”

A highlight of the Annual Meeting was the debut of the song, “Richmond Together,” that was created and performed by a large group of community members of all ages along with the band, Distant Cousins. The lyrics and music were created in a joint Zoom session by community members with the band members.  Following the session, the band finalized the song and then sent instructions to everyone to record themselves singing “Richmond Together.”

After receiving all the individual recordings, the band combined them into one final version. This was shared with the community at the Annual Meeting.

To listen to the song, visit https://youtu.be/Au9bqq0UEXk.