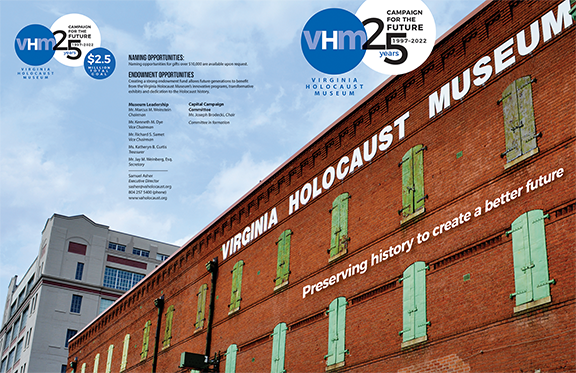 The Virginia Holocaust Museum has launched a $2.5 million “Campaign for the Future” to salute its 25th Anniversary in 2022.

“We want to recognize our 25th anniversary, so we will be set for our next 25 years,” Executive Director Samuel Asher told the Reflector.

He noted the building, a former historic, tobacco warehouse, was built it 1899. “It’s a solid building, but now has a number of needs to help us better serve our visitors and the community.”

Asher said, “Our overall goal is to present a new face to the public through renovations, repairs and creating new income areas for the museum.”

The campaign is divided in two parts with goals of $1.5 million for the building campaign and a $1 million Endowment. VHM has created a Master Plan to guide and serve as an expression of its long-range future in support of the museum’s mission. More than $700,000 has been pledged to date to the Capital Campaign, Asher said.

The first project will be to replace the heating and cooling system that the VHM board has approved moving ahead on. The goal will be to have major work on this completed prior to the “Violins of Hope” exhibit coming to the museum in August.

At its Virtual Yom HaShoah Observance in April, Asher said, “Our Master Plan Committee, led by Richard Perkins, has envisioned a new lobby/foyer, a new bookstore and gift shop and many other changes for the museum. This is a very exciting time for VHM.”

He is proud the museum has had more than 10,000 visitors since it re-opened in July 2020. “The community has responded very well in the past year. On weekends, our attendance is pretty close to our pre-COVID numbers. This is great. We are continuing to follow our safety protocols and spacing everyone out. We will continue to have new exhibits such as “Violins of Hope” and others that will have limited in-person registration. We will have a hybrid operation going forward with Zoom and in-person attendance.”

In the calendar year 2019, more than 46,000 persons visited VHM, an average of more than 125 persons a day, according to museum records.

Asher added, “We are fortunate to have a 120,000-square foot building and as we go forward, we will continue to study and plan how best to utilize our space safely.”

The museum and its architects also will be looking at other space in the building to hold potential large gatherings other than the Synagogue for groups of 200-300.

For details on the Capital Campaign, contact Asher at sasher@vaholocaust.org.