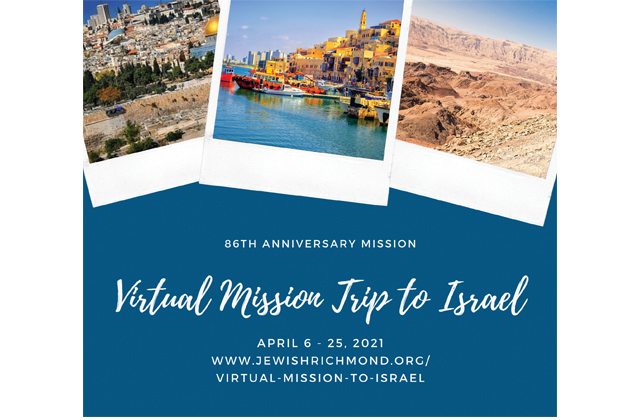 Mission Chairs Jay and Lynn Schwartz, Brian and Ruth Greene and Stuart and Dawn Siegel invite community members on a Virtual Mission to Israel from April 6-25.

Join us for a series of virtual events including sightseeing tours, an interactive cooking demonstration, speaker series, winery tours, and special celebrations for Yom HaShoah, Yom HaZikaron and Yom Ha’atzmaut.

This is Israel YOUR way. Choose from our menu of programs and enjoy with friends and family.

The Jewish Community Federation of Richmond’s Virtual Mission to Israel 2021 brings you exclusive access to quality programs to help you imagine you are still traveling, and remind you of the joys of visiting Israel in person (but without the jet lag!).

For more details and to register, visit www.jewishrichmond.org/virtual-mission-to-israel

Yom HaShoah
Thursday, April 8, noon
Partnership Together: Yom HaShoah – Holocaust Remembrance Day
Hear the story of Josef Sroka who escaped Przemysl Ghetto as a young boy with his mother and sister and lived under a fake Catholic identity. Narrated by his son, Dani Sroka.

Yom HaShoah – Virginia Holocaust Museum Program
Sunday, April 11th, 3:00 p.m.
Virginia Holocaust Museum Program
Special guest, Dr. James Grymes is the author of Violins of Hope: Instruments of Hope and Liberation in Mankind’s Darkest Hour. A stirring testament to the strength of the human spirit and the power of music, Violins of Hope tells the remarkable stories of violins played by Jewish musicians during the Holocaust, and of the Israeli violinmaker dedicated to bringing these inspirational instruments back to life.

The Meaning of Zionism
Monday, April 12th, 2:00 p.m.
Yossi Klein Halevi: “The Meaning of Zionism”
A conversation with Yossi Klein Halevi, noted author and a senior fellow with the Shalom Hartman Institute in Jerusalem. His latest book, Letters to My Palestinian Neighbor, is a New York Times bestseller. Part of a JCRC speaker series on the rise of global anti-Semitism.
Series sponsored by Allianz, Bon Secours, Dominion Payroll, and Salomon & Ludwin

Yom HaZikaron – Israeli Memorial Day
Tuesday, April 13th, 1:00 p.m.
A Masa Yom HaZikaron Virtual Memorial Ceremony
We will commemorate IDF soldiers and victims of terror at the largest virtual ceremony for the Jewish world. For Israelis, this day is one of the most important of the year as we recognize those who sacrificed their lives for Israel.

A Flight Over Israel
Wednesday, April 14th, Noon
Join Partnership2Gether on a flight over Israel with Alon Moller, a retired Lieutenant Colonel from the IDF- Air Force. Alon resides in Kibbutz Mishmarot and is a tour guide and freelance helicopter pilot who shows Israel in a way that can only be seen from a bird’s-eye view.

Israel Trails
Wednesday, April 21st, Noon
Grab your iPad and exercise along with us as we hike the Israeli Trails! We will walk the Israel Trail from the center to the upper Galilee, climb Mt. Meron and conclude at the sea in Caesarea.

Jerusalem Tour
Sunday, April 25th, 2:00 p.m.
Jerusalem Tour, including Tower of David and Mount of Olives; from the King David Hotel and Mishkanot Shaananim to the Church of the Holy Sepulcher, Temple Mount, the Mercy gate and the Western Wall.