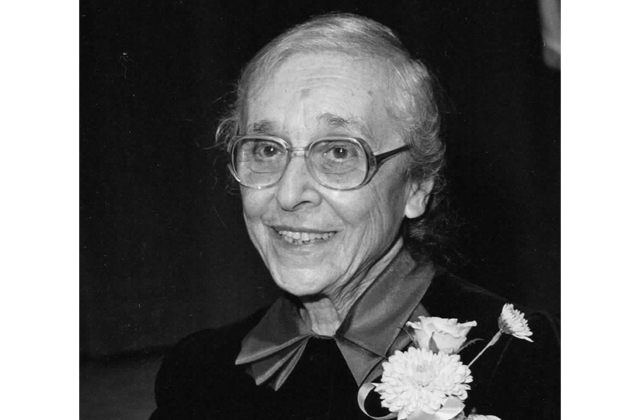 (Editor’s note) The following article is part of the Reflector series about some of the families, individuals and institutions who were and are the soul and legacy of our Jewish community over the past 85 years. We appreciate Robin Jackson assisting with these articles, and thank Beth Ahabah Museum and Archives for providing valuable archival information as well as photographs.

By Robin Jackson
Community Volunteer and JCFR Board Member

Anne Fischer lived most of her 105 years helping others and serving as an inspiration for the Richmond Jewish community.

As a civic leader and a social advocate, she championed those who needed to be served and was described by many as “an outstanding woman in every respect.”

‘A Most Rare Individual’

According to Irwin Schapiro (OBM), president of the Federation, in 1981, Anne was “A most rare individual, whose principles are people-oriented. She is a delightful person to be associated with.”

Those thoughts were echoed by many.

Born in Germany in 1902, Anne married Dr. Ernst Fischer who served on the faculty at the University of Frankfort. When Dr. Fischer lost his job, as many Jewish professionals did at the time, he, Anne and their two young children, George and Eva, came to the United States, first to Rochester and then to Richmond in 1935.

He joined the faculty of Medical College of Virginia, later becoming the chair of the Department of Physiology. She immediately became an integral part of the Richmond Jewish community.

In a StoryCorps Public Radio interview by their daughter, her mother was very unhappy to leave Germany.

“It was a hard adjustment for her.” Eva continued “so she decided to help other immigrants living in the United States.”

In 1942 she became the acting Executive Director for what was then the Federation, the first female to hold that position. It was not a great fit, and made Anne realize she still wanted to help and work with refugees.

After about three-quarters of a year, she left to pursue other opportunities including an advanced degree in social work.

She also volunteered for refugee resettlement while earning her MSW from Richmond Professional Institute (VCU) and became a caseworker with emotionally disturbed children.

Anne also continued her community volunteer work with the Federation, Beth Sholom Home, Jewish Family Services (where she also served as Executive Director from 1965 – 1967), Congregation Or Ami and the Virginia State Department of Education.

In the 1950s and ‘60s. she made seven trips back to Germany, under the auspices of the U. S. Department of State, to help with refugees and to train German welfare workers in American social work methods. She was often gone for many months at a time, her daughter remembered.

When Anne and Ernst left Germany, they were allowed to bring much of the art collection of Ernst’s family.

According to an interview by her daughter, at the time they left the rules were more lax and the artwork was considered “household goods.”

His parents collected German Expressionist art and their collection was divided between their two sons, Ernst and Max. Max, who left Germany later was not allowed to bring most of his half of the collection.

In 2016 a major German Expressionist painting, which was in the possession of the Museum of Modern Art (MoMA) in New York, but belonged to Max Fischer was returned to the children of Anne and Ernst, and was reunited with works from the Ludwig and Rosy Fischer Collection at the Virginia Museum of Fine Arts.

It was huge news because it was part of Nazi loot from when the Fischers fled Germany.

Ernst’s half of the collection was preserved for more than 70 years in their home.

Cathy Plotkin who knew Anne well through Federation, recalls the first time she met Anne at a program the Beth Ahabah Book Club did in her home. She remembers the extensive collection of art that was in the small bungalow home Anne lived in.

“It was not a place you would have thought to house this great anthology,” Cathy recollects.

Evelyn Lampert became a close friend of Anne in her later years, having two distinct connections – Congregation Or Ami and as a social worker.

Anne was looking for a “humanistic” way to express her Judaism and Or Ami filled that need with practices that being a “good Jew was being a good person,” explained Evelyn.

Anne became more spiritual as her relationship grew at Or Ami. “She came to everything at Temple – she was always there and was very involved and supportive.”

Evelyn shares that they had wonderful conversations about good character and people’s good traits, which she always believed in.

They also shared their profession – Anne always loved to share thoughts and conversations about social work and helping others – especially with other young social workers. She thought their work was important and wanted to spirit them along.

Evelyn recalls that “she was ageless – she maintained her intelligence and her wisdom for all of her life, even as her physical side was waning.”

Cathy Plotkin echoes that thought and recalls her as “extremely bright. She always thought before she contributed or acted. And she was sharp as a tack up until the end.”

Inge Horwitz also grew close to Anne in her later years. She fondly recalls drinking hot chocolate with her in her home. Inge reminisces about “her great big smile.” She says that while Anne was “reserved in her manner, she was a positive person and laughed easily.”

She also enjoyed having visitors. In 2002 to mark her 100th birthday, Inge recalled, “She has never retired from living fully- she is an inspiration.”

The list of accolades and awards for Anne was extensive. The Federation awarded her the Distinguished Community Service Award and the Lifetime Achievement Award. She received the first “Woman of Valor” award from the Jewish Welfare Campaign in 1993, the Anne and S. Sidney Meyers Endowment Achievement Award and the Distinguished Service Award and the Methusaleh Award from Beth Sholom Home. Congregation Or Ami named her its Congregant of the Year. B’nai B’rith Women gave her the Sophie Stahl Award.

The National Conference of Christians and Jews honored her with its Humanitarian Award, and she received the Fischer-Wickham Award from the YWCA of Richmond.

Tributes from friends and colleagues remarking her dedication, kindness and passion are abundant. In 1996, as the Federation President, Cathy Plotkin spoke of her “lifelong dedication to the community and Jewish Community has been a paragon of volunteer works and she has set very high standards for generations to come,” and today recalls her as “just a lovely human being. It was special to know her.”

To commemorate her 100th birthday, Rabbi Leivy Smolar (OBM) who was Rabbi emeritus of Or Ami at the time said “She has devoted her life to empowering humanity through her understanding of the essence of Judaism and her love for people. Her life has been a century of rejoicing and we have all been blessed by it.”