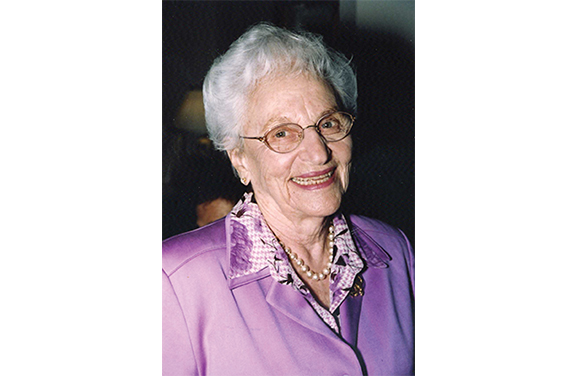 (Editor’s note) The following is the 5th article in the Reflector series about some of the families, individuals and institutions who were and are the soul and legacy of our Jewish community over the past 85 years. We appreciate Robin Jackson assisting with these articles, and thank Beth Ahabah Museum and Archives for providing valuable archival information as well as photographs.

Amy Meyers Krumbein, who will celebrate 104 years on February 10th, has been a Richmond resident for more than 70 years.

When Amy and her husband, Nat, moved to Richmond in 1950, they already had three children and a passion for involvement in the Jewish community.  They joined Temple Beth-El, were involved in the development of the Jewish Community Center and were very involved for the next 50 years in Hadassah and the Anti-Defamation League.

At 104 years old, Amy still remembers when horse-driven carriages and the first automobiles shared the roads together. Her family had a barn in the backyard to house their horse and buggy. The family raised chickens in the backyard and the local Shochet (Kosher butcher) came once a week to Kasher the chickens.  Beef was procured from a farmer who sold an entire cow to be shared by several families, and kept in the ice box (kept cold by the ice man who delivered ice weekly).

Born in Goldsboro, North Carolina, Amy was youngest of three children of Latvian immigrants, Joseph Max Meyers and his wife, Annie Kadishevitz.  Initially, the Meyers shared their home with Annie’s sister and brother-in-law, Sarah and William Heilig, and their daughter, Leah, who was seven years older than Amy.  The Heiligs lived upstairs while Amy, her two older brothers, Hyman and Sidney, and their parents lived downstairs.  The Heiligs and the Meyers lived completely separate lives, cooking and eating separately, except for holidays.  Amy recalls getting dressed on cold winter mornings around the kitchen potbelly stove, as there was no central heating.

Amy, her two brothers, with their parents, were always actively involved in the small Jewish community of Goldsboro, as well as with other Jewish communities of eastern North Carolina.  Their Kosher home was always open to Jewish travelers and to Jewish soldiers at the nearby Seymour Johnson Air Force Base.

Starting school at five years old, Amy graduated from high school at 16, younger than her peers.  Amy remembers the controversy about her going to college.  “Papa” didn’t feel that Amy should go to college because she was a girl, but her mother, who had no formal education, said, “Amy is going to college because she will not be a second class citizen!”  So, she began college at Duke University, a relatively short distance from her home.

After a year, Amy transferred to the University of Alabama where there were more Jewish students.  A social butterfly, she was a founding member of SDT sorority, went to many parties, and her house mother remarked that she had never seen anyone get so dressed up just to go the library.

After graduating with a major in history, Amy and several girlfriends moved to New York City, sharing a one-room apartment at the Barbizon Hotel for Women.  She found a job as an interior designer, working for Vinicio Paladini, a futurist painter and interior designer.

When the United States entered the Second World War, Amy was called home to Goldsboro to be with her parents. Leaving the glamour of New York with horseback riding in Central Park, attending the Opera and shows, and more parties than one can imagine, was hard for Amy.

Once back in Goldsboro, she filled her days with teaching flower arranging and Bridge to Army wives, and playing golf with anyone who would play with her. While helping to entertain the soldiers at Seymour Johnson Field, Amy double-dated with Dean Martin who had a date with her cousin, Ida Kadis.

But when the entertaining and handsome Army Captain Nathaniel Krumbein walked through her door, she married him three months later. Eleven months later she gave birth, at Fort Benning, Georgia, to the first of their four children, Charles.  During the war, Nat rose to the rank of major and was in charge of training men for combat.

Nathaniel Krumbein (1914-2005) was born in Washington, Georgia, eldest child of Romanian immigrants, Leo Krumbein and Esther Simowitz.  Nat’s father owned a dry-goods department store in the center of “Little Wash-ington,” and soon became the mayor of the town, teaching his son the importance of actively working to improve the town and of standing up strongly for the equal rights of Jews and everyone else.

It was a lesson that Nat followed for the rest of his life, at college, in business, and in his work with the ADL.

He went to college at the University of Georgia at a time when the number of Jewish students admitted to medical schools was very limited. Like so many others, he went instead to pharmacy school, a profession that he actively pursued for the rest of his life.  (When he died in 2005, he was the longest actively-licensed pharmacist in the Commonwealth of Virginia.)

Before he could marry and open his own pharmacy, World War II arrived and Nat served, rising to the rank of major, until the fight was over.

After the war, Nat and Amy moved to Charlotte, North Carolina, where Nat opened a small chain of pharmacies.  While living in Charlotte, they welcomed two more children, Joyce (now Joyce Krumbein Slater), and Michael.  Amy and Nat were close personal friends with their Rabbi and his family and became actively involved in their Synagogue and the Jewish community.

Since there was no Jewish nursery school in Charlotte, Amy started one.  Eventually the little nursery school grew into Charlotte Jewish Day School, still thriving today.

In 1950, Nat and Amy, with Charles, Joyce and baby Michael, moved to Richmond, where they lived in a first-floor apartment on the corner of Monument Avenue, at The Boulevard.  Nat joined Amy’s brothers and her father, Max, in the Heilig Meyers Furniture Company.  The couple soon became active at Temple Beth-El and the Richmond Jewish community.

Just before they moved into their home on Oak Lane, their fourth child, Lee was born. Amy continued her very active volunteer work with Hadassah, and also began to study the Weiss Method of teaching reading.  Soon she was tutoring children in the Richmond City Schools, as well as teaching adults to read at J. Sargeant Reynolds Community College.  She was famous for saying to her children and to those she tutored, “I don’t care what you read, so long as you keep on reading.”

While their children were growing, Amy served as president of Jewish Family Services, the Jewish Women’s Club and as president of the Southern Seaboard Region of Hadassah (1987-1989), which was comprised of 21 chapters in Virginia and North Carolina.

Along the way, Amy always made time to serve the larger Richmond community.  Her volunteerism included serving as chairman of the Apartments and Small Business Division and co-chairman of Special Gifts for the United Givers Fund. In the 1990s she was appointed by the Governor to serve on the Psychology Licensing Board for the Commonwealth of Virginia.

Of all Amy’s volunteer activities, Hadassah has remained her first love. Among Hadassah volunteers, she was known as a peace maker and as one who could talk anyone into taking a job.  Amy believed in Hadassah and took great pleasure in raising hundreds of thousands of dollars for such a noble cause.

While Nat worked at Heilig Meyers, he also continued his active and dedicated community service with the Anti-Defamation League.  He served for many years on the regional and national boards, and worked tirelessly with Bishop Walter F. Sullivan and others, to develop positive interaction among the Jewish, non-Jewish, Asian and Black communities.

He always felt that when people know members of other segments of the community, they are better able to work together for common goals to benefit everyone.

Nat also took that attitude to other places. He served on the national board of Alpha Epsilon Pi, a national fraternity that taught responsibility, respect and the benefit of community action to Jewish college boys.  He was elected National President in August 1968, just two months before his first grandchild was born.

Nat was a dedicated and effective member of AEPi, as were each of his sons, and his grandson, Jason.  Each served as officers on the college campuses where they attended.

When her mother passed away in 1963, Amy began her five-day a week swimming habit (with her close friend Joan Ruby) at the JCC.  Joan and Amy have shared their enjoyment of swimming together for more than 40 years, in Richmond and during the summers at Virginia Beach, and they have loved every minute of it.

Amy’s other joys include her long-time active membership in the Jewish Women’s Club, Questors Book Club, and a long-standing bridge game with close friends.

Among the many awards Amy has received are the Sophie Stahl Award from B’nai B’rith Women, the Distinguished Community Service Award from the Federation, and Shalom Hadassah’s Woman of Valor Award in 1997.

In announcing the Federation high honor for Amy in the Oct. 1, 1978, issue of the Reflector, President Hortense Wolf noted,” Amy Krumbein serves as the model of effective leadership and deep commitment to Jewish values to many men and women in the community.”

In 1993, Amy and Nat were jointly honored with the National Conference of Christians and Jews Brotherhood Citation, and in 2000, both were awarded the Rudlin Torah Academy’s Chesed Award.

Amy and Nat’s home has always been welcoming to newcomers to Richmond, to young people hoping to meet new friends, to Jewish women’s organizations, and to any and all events that help to strengthen the Richmond Jewish community.

They were famous for their lively and festive Shabbat dinners and Passover lunches when they hosted many people throughout the years. Whether they were hosting musicians, intellectuals and writers, young Jewish singles, friends from the community, they always had time for family and friends.

Amy continued the tradition of inviting guests for Shabbat dinner until COVID restrictions would not allow it.  The family hopes to rekindle their family/community Shabbat dinners when the pandemic ends.

The stories of Amy and Nat are many.  They worked as a team.  They enjoyed, they encouraged, and they supported each other.  They showed the way, to their children and their communities, with their determination for inclusive action, and by always striving to do the right thing for the benefit of the Richmond community.

-Their four children with their spouses live in Richmond, as do many of the grandchildren. Their great-grandchildren are spread across the globe from Colorado to New England to Israel.  The children and grandchildren of Amy’s brothers, Hyman and Sidney Meyers, are an active and integral part of the family as well.   Members of the family have followed the family tradition of being actively involved in the Jewish and secular communities.

Since Nat’s death in 2005, Amy has remained the active center of a large and close Jewish family.  She and Nat were rewarded for their life’s work with the love and blessings and respect of all.

Amy has continued to be a role model not only for her children, grandchildren and great grandchildren, but for others in the community as well. Many young women who have worked with Amy through the years have said to us, “I want to be just like your mother when I grow up!’”

Amy credits her longevity to her positive attitude, her love of people, her swimming and her intellectual curiosity. When people have said to her, “Amy, you have done so much for the community!” she replies

“The community has done so much for me!”