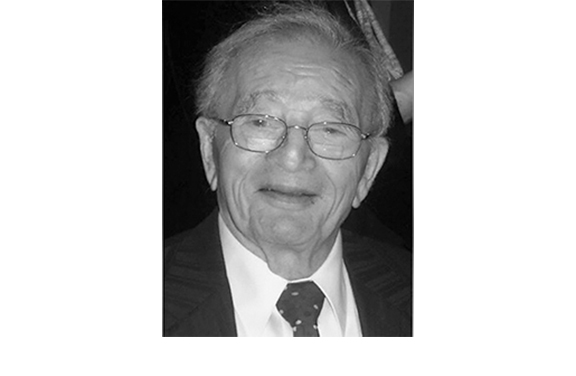 Editor’s Note: The Virginia House of Delegates and Senate approved a resolution in January – HJ 571 – Celebrating the Life of Alan Zimm. Mr. Zimm (obm), a Holocaust Survivor, passed away on April 18, 2020, just one-month shy of his 100th birthday. The resolution was introduced by Delegate Schuyler T. VanValkenburg. The full resolution follows.

WHEREAS, Alan Zimm, a Holocaust survivor who ultimately made his home in Virginia and served generations of Richmond residents as a tailor, died on April 18, 2020; and

WHEREAS, a native of Kolo, Poland, Alan Zimm witnessed firsthand the invasion of his country by Nazi Germany, returning home one day to find that his family and many fellow Jews had been abducted by the Nazis; and

WHEREAS, Alan Zimm escaped to a relative’s house but was subsequently captured and forcibly relocated to the nearby Lodz ghetto, an area of less than two square miles that housed 200,000 people, nearly a quarter of whom would die from starvation, cold, or disease; and

WHEREAS, Alan Zimm was later sent to the Czestochowa ghetto and the Buchenwald, Dora-Mittelbau, and Bergen-Belsen concentration camps, enduring years of cruelty and mistreatment until he was liberated on April 15, 1945; and

WHEREAS, after the end of World War II, Alan Zimm reunited with his older brother Sol, one of his only surviving family members, and lived in Poland and Germany before he was sponsored by a Jewish relief organization to immigrate to the United States; and

WHEREAS, having learned to sew from another brother, Alan Zimm quickly began working as a tailor after he settled in Richmond; he saved money while working for a local haberdasher, then opened his own tailoring business on Meadow Street; and

WHEREAS, in the 1950s, Alan Zimm’s Custom Tailor Shop moved to Patterson Avenue, where he served members of the community for the next several decades; and

WHEREAS, Alan Zimm took great pride in his work, and his daughter, Ruth, ultimately followed in his footsteps in the clothing business; the duo worked closely together for more than 30 years after she opened her own store next to Alan Zimm’s Custom Tailor Shop; and

WHEREAS, over the course of his career, Alan Zimm built strong personal relationships with his clients and was known as much for his commitment to excellence as for his incomparable work ethic; he joked that he had gone into semiretirement when he merely reduced the shop’s hours from six days a week to five and a half, and he didn’t officially retire until the age of 97; and

WHEREAS, Alan Zimm’s quiet dignity and unfailing kindness inspired others to lead lives of hope and humility; he participated in many events memorializing those lost during the Holocaust and frequently volunteered his time to educate young people about the dangers of anti-Semitism and other forms of bigotry; and

WHEREAS, Alan Zimm will be fondly remembered and greatly missed by his wife, Halina; his four children, Solomon, Ruth Ann, Rebecca, and Josh, and their families; and numerous other family members and friends; now, therefore, be it

RESOLVED by the House of Delegates, the Senate concurring, That the General Assembly hereby note with great sadness the loss of Alan Zimm, an inspirational member of the Richmond community; and, be it

RESOLVED FURTHER, That the Clerk of the House of Delegates prepare a copy of this resolution for presentation to the family of Alan Zimm as an expression of the General Assembly’s respect for his memory.

Third Violins of Hope Featured Concert with the Richmond Symphony!

Benny Winkelmann to begin a ‘journey of a lifetime’